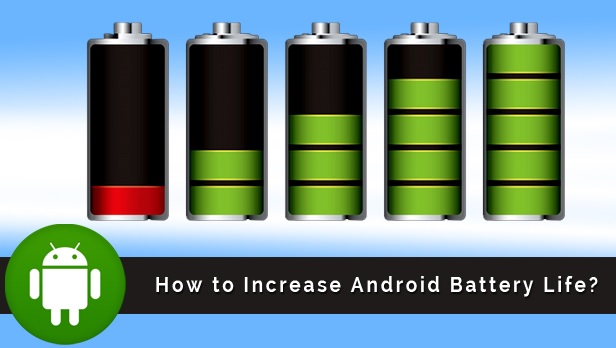 Realizing the multi-functionalities of the Smartphone which let users to play games, snap photographs, access internet, stream videos and many more; it is no wonder that battery life has been a major concern and one of the most ordinary complaints for the mobile user at all times.

An unsatisfactory situation mostly faced is the low battery notification whilst one needs to send an important email or a phone call resulting in a trip to walk with an adapter or searching for an outlet to recharge. But, battery life can effectively be managed and extended by combating the prevalent causes of phone’s battery life consumption.

Advertisement
Contents hide
1) Disable Notifications and Fetch Emails
2) Control Shaking Of The Phone By Turning Vibration Mode Off
3) Easy On Screen Brightness
4) Cut Down Screen Timeout
5) Stop Draining Phone, Turn Off GPS, Bluetooth, Wi-Fi, 3G/4G When Not In Use
6) Rest Phone In High Connectivity Zone And Mostly On Wi-Fi Networks
7) Kill The Apps

Smartphones have provided user with great comfort of delivering the whole lot without delay as they occur. Being constantly connected to the internet, we are continually updated by the notification of email, news alerts, the weather, tweets, add-ons for applications etc. This is a great power sucker as every incoming notification will lit the screen or chime or vibrate. Similarly, fetch emails will look for new emails on server in every few minutes, which also gulp the battery juice.
To keep the phone lasting very long in the hands, adjustment of the email fetching intervals and notifications is required. Changing the email notifications to manual can save the battery power. Turning off the superfluous and non-essential notification such as instant game alerts can make a huge difference in the battery drain.

2) Control Shaking Of The Phone By Turning Vibration Mode Off

Vibration mode is good enough for notifying about incoming calls or messages during meetings, class, hospitals or other places where it’s essential to keep the phone on silent respectively. However, vibration uses additional power the ringtones. This is because the sound produced by ringtones only pulse the speaker membrane whereas shaking the whole phone on vibration mode sucks the battery to its maximum.
Lessen the vibration mode extend battery timings. However, in such places where it doesn’t matter whether to keep phone on vibration or general mode, it is good choice to turn the phone out of vibration mode or trim down the magnitude of the vibrations if the users wants to keep their Smartphone on for long.

The phone battery cannot be used for so long until the brightness have not set to dim. This factor affects the battery life significantly. Dimming the screens will dramatically diminish the Smartphone’s power consumption since screen is frequently activated whenever the phone is used. The lower the healthier for the phone’s battery. Auto-brightness setting is a favorable choice in order to adjust the brightness to its optimal level for reading while saving the battery life.

Another significant setting to glance at is the screen timeout. Screen timeout actually decides that after how long the phone’s screen will go to sleep as soon as one ended interacting with it. Lesser timeframe is better for the battery life. User should also make a habit to lock the phone after using so that it cannot glow for long.

5) Stop Draining Phone, Turn Off GPS, Bluetooth, Wi-Fi, 3G/4G When Not In Use

GPS, Bluetooth, WI-FI, are some of the biggest battery murderers on cell phones, because they are continuously hunting for possible connections, networks, or data and power is consumed in such searches for signals.
There is no point to let Wi-Fi, Bluetooth and GPS on when there is no need to be connected. To make a one tap process, many Smartphone users are provides with the service of widgets, which they can add to their home screen for Wi-Fi connectivity. Another practical attempt is to switch the phone on airplane mode, where there is no possibility to connect with any signal.

The power is drained constantly whenever the Smartphone makes an attempt to search signals. If placed in the poor reception area, the phone will continue to scan for signals to attain good connections. This effort makes the battery level drop a notch. Keeping the phone in good reception area will cut down the effort of constantly seeking for a connection and frequent switching from one signal to the other, resulting in maximizing the battery life.

Having Wi-Fi on kills the battery when not in use. But cellular data connection, 3G or 4G is less power- efficient than Wi-Fi networks comparatively. Therefore, it is a good idea to switch to Wi-Fi instead of data connections when Wi-Fi connections are available. Besides, the Wi-Fi should also be turned off when neither Wi-Fi network is accessible.

The concurrent operations of the Smartphone are one of the main causes of rapid battery drainage. Various applications are left open after using, when it is no more needed. As often as possible, the applications should be closed when it is not being used because not doing so will burn a lot of energy and will leave the battery at half-bar very soon. Some applications can be kicked in the phone to manage the applications while conserving the battery.
8) Turning On The Power Saver Mode Can Save The Juice
Smartphones are equipped with power saver modes which can automatically avoid apps from updating in the background, disables vibrancy, faint the screen and reduces the screen timeout settings. It manages the phone’s power consuming features. Hence, the longer Smartphone’s battery will last if the power saver mode in turned on as soon as possible.